Books for Teen Boys
By Carlie M A Cullen

Getting teen boys to read isn’t an easy task unless it’s something they’ve grown up with and really enjoy. Let’s face it the vast majority of boys in that age group are interested in sports, gaming and maybe girls. So what sort of books would you look to give a male teen?
I think it has to be something they can relate to, subject matter which will pique their interest and spark their imagination. Fantasy; swords and sorcery, Action and Adventure, Sci-Fi – there are some really great books available for boys of all ages.

In my opinion, you can’t beat the Harry Potter series by J K Rowling. These books appeal to all age groups and both sexes. There’s plenty of action, intrigue, sorcery and with the lead character being male, other boys can relate to him. I don’t think I need to say much more about this series as it’s so well known.

For younger teen boys there’s The Secret Diary of Adrian Mole aged 13 ¾ by Sue Townsend. This was made into a TV series in the UK and is a very British book. The premise of the book is as follows:

The book is written in a diary style by Adrian Mole, a thirteen year old boy who, although writes confidently, often misinterprets and does not understand the events that go on around him. The book follows him through the year of 1981 and a bit of 1982, starting with his new year's resolutions including "stopping squeezing my spots" and "vowing to never drink alcohol... after hearing disgusting noises from downstairs last night." Mole is a self-described intellectual who writes unreliably about the events he goes through and his troubles as an adolescent - resulting in a light-hearted and amusing book.

He writes bluntly about his parents' marital troubles and his own relationship with Pandora, a fellow Year 9 with beautiful "treacle hair": "Pandora and I are in love! It is official! She told Claire Nelson, who told Nigel, who told me." Adrian Mole also writes about his cringe-worthy poetry, his troubles at school, his acne problem, the Royal Wedding and his eighty-year old friend Bert, and numerous other events. 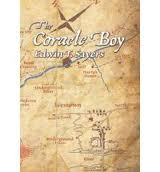 A long time ago, in a land not too far away, there was a fabled and mysterious place known as ‘Farland - the land of the great swamp’. At its heart lay the town of Westown, the home of Harry, the ‘Coracle Boy’.

Time and time again pirates and robbers from all over this land came to plunder the good folk of Westown, rampaging and taking anything they could. The people of Westown dare not venture into the forests and even the river that had supplied food and goods from far away were now deemed unsafe to travel.

But Harry knew the river like the back of his hand and no-one knew how to use a coracle more than he. And now, more than ever, Harry’s skill and determination were desperately needed. For it was only Harry who could navigate this dangerous, swollen river and get a message to General Smith that the notorious King Axel was about to mount his most vicious assault. . . Will Harry be able to save the day?

The future of Westown depends upon the ‘Coracle Boy’.

For boys aged 16+ there’s The Boy Who Made It Rain by Brian Conaghan. 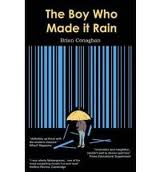 When a school tragedy happens, you may lay the blame on society, the Internet, TV or violent films. Not many of you think it could be the parents' or teachers' fault, do you? But then, is it? We have our say, spout off opinions in different directions according to our view of the world. In this novel, too, they all have their say, but who's right?

At only sixteen Clem's world is turned upside down. His Willy-Loman-like father, a travelling salesman and a loser, is transferred from Eastbourne to Glasgow and along with him go Clem and his meek accommodating mother. But Glasgow is rough and Clem's posh English accent is not well-accepted in the sink school he attends. And he's a brilliant scholar. He soon becomes the target for McEvoy's group of thugs for whom slashing faces is the most important ambition in their depraved lives. When a school tragedy happens, you probably lay the blame on society, the Internet, TV or violent films. Not many of you think it could be the parents' or the teachers' fault, do you? But then, is it? We all have our say, spout off opinions in different directions according to our view of the world. In this novel, too, they all have their say, but who's right?

There are some other great epic fantasy series appearing on Kindle and paperback like DarknessRising by Ross M Kitson, The Tower of Bones series by Connie J Jasperson and The Never Chronicles by none other than our very own J R Wagner.
A few other titles that caught my eye are:
One Dog and His Boy – EvaIbbotson
Boys Without Names –Kashmira Sheth
The Book of Ralph – JohnMcNally
The Kite Runner – KhaledHosseini
The Ice Boy – PatriciaElliott
There are plenty of books to choose from and I’ve only selected some here that really captured my attention. Ultimately, if you’re buying a book for a teen boy, you need to know what type of things he likes. It’s a bit of a minefield, but if you do your homework, you’re sure to pick a winner!

Carlie M A Cullen is the author of newly released novel Heart Search.