I'm doing something a bit different and have decided to be a part of a blog tour for a very cool author. His name is Hock G. Tjoa and his novel is The Chinese Spymaster.  Below you will find my gripping interview with the author. 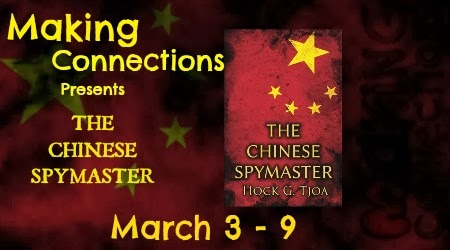 Chinese Intelligence uncovers a North Korean trying to sell a nuclear device. Then they find five other dealers trying to do the same. The buyer is the same in every case--the Pashtuns. Is this a "Pashtun Spring"? A realignment of geopolitical power in Central Asia? A resurgence of Islamist terrorism? In order to anticipate and confront these threats, Spymaster Wang must negotiate through bureaucratic rivalries, as well as personal ambitions, at home and abroad. He reaches for ancient insight into strategies and unorthodox alliances. But the struggle he must undertake cannot cease, and the outcome always remains in doubt. The Spymaster must also confront a vendetta within the Party as well as the determination of his Old Friends and their wives to make him a "match." Hock G. Tjoa was born to Chinese parents and studied history at Brandeis and Harvard. He taught European history and Asian political thought at the University of Malaya in Kuala Lumpur and has published George Henry Lewes, a Victorian Mind, "The social and political ideas of Tan Cheng Lock" and various articles in the Newsletter of the China History Forum. He is married and lives with his family in the Sierra Nevada foothills of California. He published in 2010 "The Battle of Chibi (Selections from The Romance of the Three Kingdoms)" that he had translated, and in 2011, "Heaven is High and the Emperor Far Away, A Play" that he translated and adapted from Lao She's Teahouse. Both are part of his project to make more widely known traditional Chinese values.

When did you first start writing? Do you recall your first writing project?


​I wrote a couple of very bad plays for our high school clubs and did not start writing "stories" again until six years ago. But I have been writing for school and job projects all my life.

When did you finish your first book?

My first book, George Henry Lewes, A Victorian Mind, was a research project for college that was published.​

Do you work with an outline, or just write?

I have working lists of chapters and characters which are revised or discarded as the characters or situations take over.

Is there any particular author or book that influenced you in any way either growing up or as an adult?

​I was a science fiction fan in high school and college and read as much of Isaac Asimov and Arthur C. Clarke as I had time for--they were pretty prolific writers.

Is anything in your book based on real life experiences or purely all imagination?

What was your favorite chapter in The Chinese Spymaster to write and why?

​Some chapters were more fun to write and others more satisfying because of the challenges, fight scenes (first time), bureaucratic arguments (how to make this interesting), interrogation of an arms dealer (how to avoid all the cliches). Perhaps most enjoyable was how to find a match for the Spymaster and get them on a date! ​

Are there certain characters you would like to go back to, or is there a theme or idea you’d love to work with?

​I enjoyed writing about the gatherings​ of family and friends even though these were difficult to weave into the plot of the novel; sometimes I think about making gatherings like them the centerpiece of another novel

Tell me about your writing environment. Do they use a pen and paper, laptop? Quiet room, music or what? Dog at their feet? Cat on the desk? Just whatever makes it comfortable to be productive.

​In the old days when one could get someone else to type something hand-written, I remember that I really liked to write by hand on paper. But now that I have to type into a computer​ ​it just doubles the work. I have an old laptop in a small room and two cats that come in and take their naps on an old bed.

​Star Wars was so much more fun, but I liked the ingenuity of the Star Trek series. I've watched them all many times.

Are you working on any other creative projects at the moment?

​I dabble in community theater and am stuck a third of the way through a new novel..​

What do you think of what's happening with the publishing industry right now?  Any speculation as to where it is heading?

​I don't think about this at all even though I belong to a writers' group and we discuss it all the time; it's going where it's headed.​

Do you have any funny stories involving a creative project you've worked on?

Sometimes I get a laugh out of reviews that say in effect that I should have written a different book.​​

​I like watching both NCIS and White Collar simultaneously and hope their commercial breaks never coincide.

​
If you could have dinner with one person dead or alive, who would it be?

What makes you laugh?

​Movies like Get Shorty and A Fish Named Wanda.

Have you ever cast a spell, drank blood or ate raw meat due to a subconscious predatory urge you weren't aware of? (or maybe you were)

Who's the best character on The Walking Dead?

If you could have one preternatural power, what would it be?

Getting to an appointment instantaneously--flying, "apparating" or whatever.​

Have you ever been paintballing?

​Just once; it got too messy.

Have you managed to make peace with all the social media marketing required to get your name out there as an author or do you feel overwhelmed by it? How do you find a balance between 'working' that market and being creative (writing). I find it easy to get sucked into everything and completely distracted from writing.  How do you cope?

Just do what I can and stop when it's time to write (easier said than done).​​

Why do you write?  What’s in it for you?

​When I write, it feels like there is nothing else I would rather do.​

The world would be a better place if...

​...Nobody thinks that violence/war is a solution for anything.​

The Chinese Spymaster, at first glance, seems to be James Clavell’s Shōgun/Tai-Pan (Asian Saga series) mixed with Tom Clancy’s The Bear and the Dragon.  The excitement of Clancy and the depth of culture, character and plot of Clavell.  Is this an accurate comparison?

​I like the movies made from Clancy's books but find reading them difficult; his view of the world strikes me as old fashioned--there are cowboys and there are Indians, and the future is going to be decided in a single battle.

What do you think lies ahead for China as a country?  From my ignorant perspective it seems as though they are at a crossroads when it comes to economic development.  They could rise to the opportunity and become the financial superpower in the world or they could flounder and slowly crawl toward getting their financial house in order.  Will their traditionalist beliefs inhibit their growth as a nation?  (I realize this isn’t relevant to your novel but I’ve always been fascinated with Chinese economics.)

​I think that it is a disgrace to have such bad air and water quality in a country that has made so much economic progress. It is also a disgrace that healthcare for the poor and rural people is almost non-existent. One episode in The Chinese Spymaster describes how traditional/herbal medicine is brought back to a small village.​

I see your on your bio you taught European history and Asian political thought at the University of Malaya in Kuala Lumpur.  I’ve always been fascinated by Kaula Lumpur and Malaysia but have never had the opportunity to visit.  Is K.L. the growing, diverse metropolis surrounded by the beauty of the jungle and turquoise waters that I’ve heard? It looks as if you could be in downtown K.L. and within an hour, be lost in the jungle or sitting on an empty beach.  True?

​On my last visit to Kuala Lumpur, I discovered that most drivers have GPS and they really need them. If you could get to the edge of the city, it would take about an hour or two to those jungles and beaches. But getting across the city could take much longer.​ 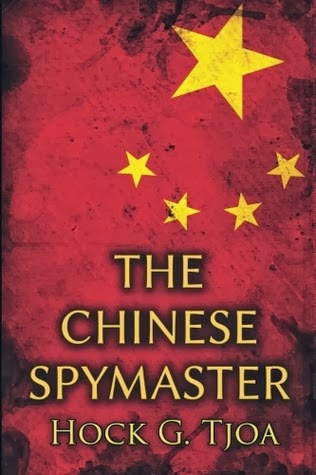 The Chinese Spymaster is available now.  Find it online at...

Add it to your Goodreads shelf