Brad Wiggins vs Chris Frome... My Time vs The Climb 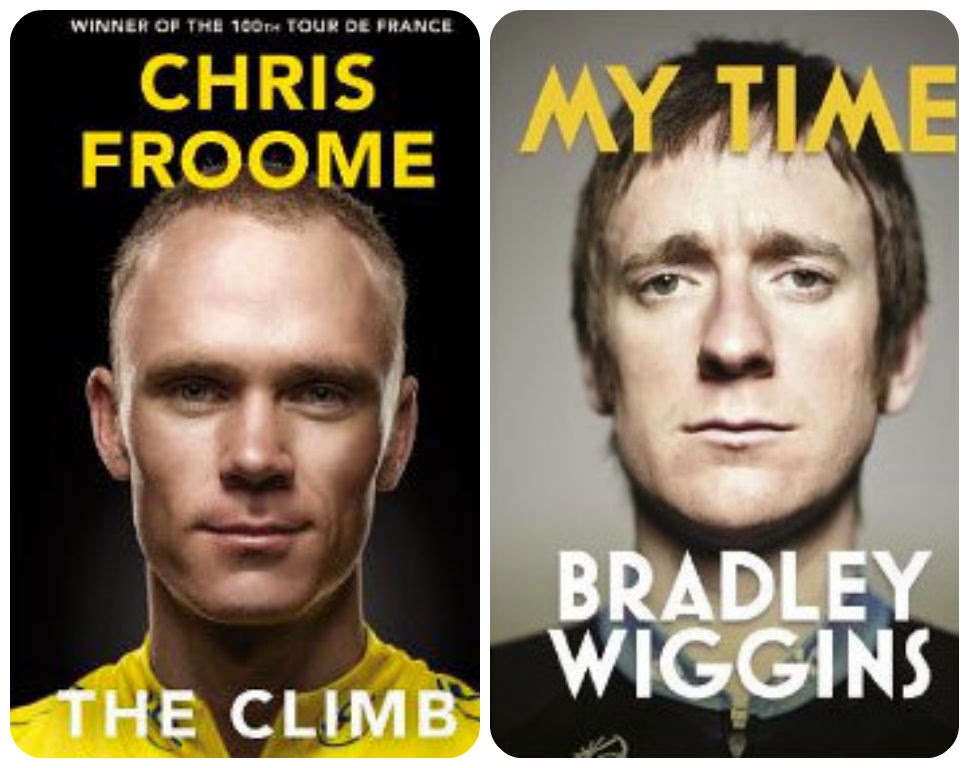 For those of you who don't know, I'm a huge cycling fan.  Now you know.


I read The Climb by Chris Froome right after reading My Time by Brad Wiggins and am going to do a quick comparison between the two books.

From a reader's perspective, Froome's autobiography, The Climb, was much easier to read, more linear, less confusing, lighter and frankly, the writing was superior.

Brad Wiggins the man (sorry, the knight), from outside the fish bowl, is an enigma and comes across as an enigma via his writing.  He is consistently inconsistent, at times aloof and seems incredibly (and sadly) insecure with himself.

This comes out in his writing -how he describes his interactions with others, how his thoughts are all over the place.  I would have thought a good editor would have reigned in his tangents but perhaps it was an attempt to...allow readers a glimpse inside the mind of Sir. Wiggo.  Brad's story was post-olympics and onward and it lacked the foundation, the back story that was so prevalent in Froome's The Climb.

This may never be done again in the history of the sport.  When Brad is on, he is phenomenal -unstoppable in the time trial.  I believe Froome could take him in the mountains...but that's neither here nor there.

Back to the books...
The window into Froome's past that comprises the first quarter (or more) of his book is very well written and entertaining.  It gave me insight into the man I see in the media and on the television during the race season.

The endearing account of his early life in Kenya followed by his early cycling career and taking us through his 2013 Tour de France victory is one of the best athlete autobiographies I've had the pleasure of reading.  My perception of Chris is someone I'd love to meet -a nice guy (although fiercely competitive).

Brad Wiggins has moments where he, too, can be that guy you'd like to meet in a local pub and share a pint in his autobiography...but it is spotted with moments that made me wonder if that was the real Brad...or is Brad the other guy -the guy with the walls all around him, the guy who can't communicate with his own team.  He leaves you confused because I think he is confused.  I truly hope Wiggo is able to find peace in his life.


So, in summary: The Climb: excellent read, highly recommend. My Time is more sterile, harder to read but a highly interesting glimpse into the mind of a cycling legend.  While Froome speaks more of his interactions with Wiggins, the stories intertwine so much that if you're going to read one, you certainly should read the other.  Start with My Time (otherwise your perception of Brad may be poisoned before you give him a chance).

2015 should be a great year for cycling and the paths of Chris Froome and Sir Bradley Wiggins will no doubt be captivating.
Posted by J. R Wagner at 9:52 AM No comments: