As part of the lead-up to the October launch of Evasion, book 2 of The Never Chronicles, I will be hosting a writing contest each month.

Prompt: Write a story that centers around a zombie, zombies or the zombie apocalypse.  That's it. Seriously.
​
​PLEASE read the contest rules HERE I STRONGLY RECOMMEND reading the scoring rubric (found in the contest rules). It will tell you exactly how each submission will be scored. 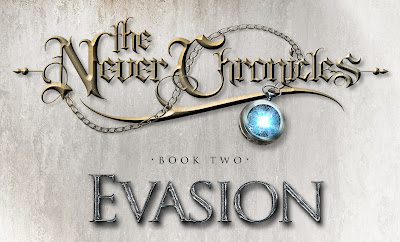 
Due to circumstances beyond my control, the release date of Evasion has been pushed back to Spring of 2015

Evasion, the second book in The Never Chronicles series will release on October 28th of this year.

There will be an exclusive launch party (with a cool, Halloween tie-in) location and details forthcoming.

Starting in June, I will be hosting one writing contest each month leading up to the launch in October.  The prizes should be quite cool.  Look for a blog post this week regarding the June contest details.

There will also be giveaways each month beginning in June and running through the release date.

TheNeverChronicles.com is currently undergoing a facelift.  The new look and functionality release will available soon.

The Evasion cover reveal will come early August.  I am very excited about this cover (designed by the super-talented Todd Berkhammer) and can't wait to hear what everyone thinks.  If you would like to be part of the cover reveal, send me an email.  JRW@theneverchronicles.com

Book one, Exiled as well as Tristis Manor will be running at special sale prices during the June-November promotional period.

Thank you for your continued support.  I truly appreciate it.

Customizing the columns for Scrivener in the outliner view

Can you tell I'm obsessed with Scrivener yet?

First, THIS is the outliner view. 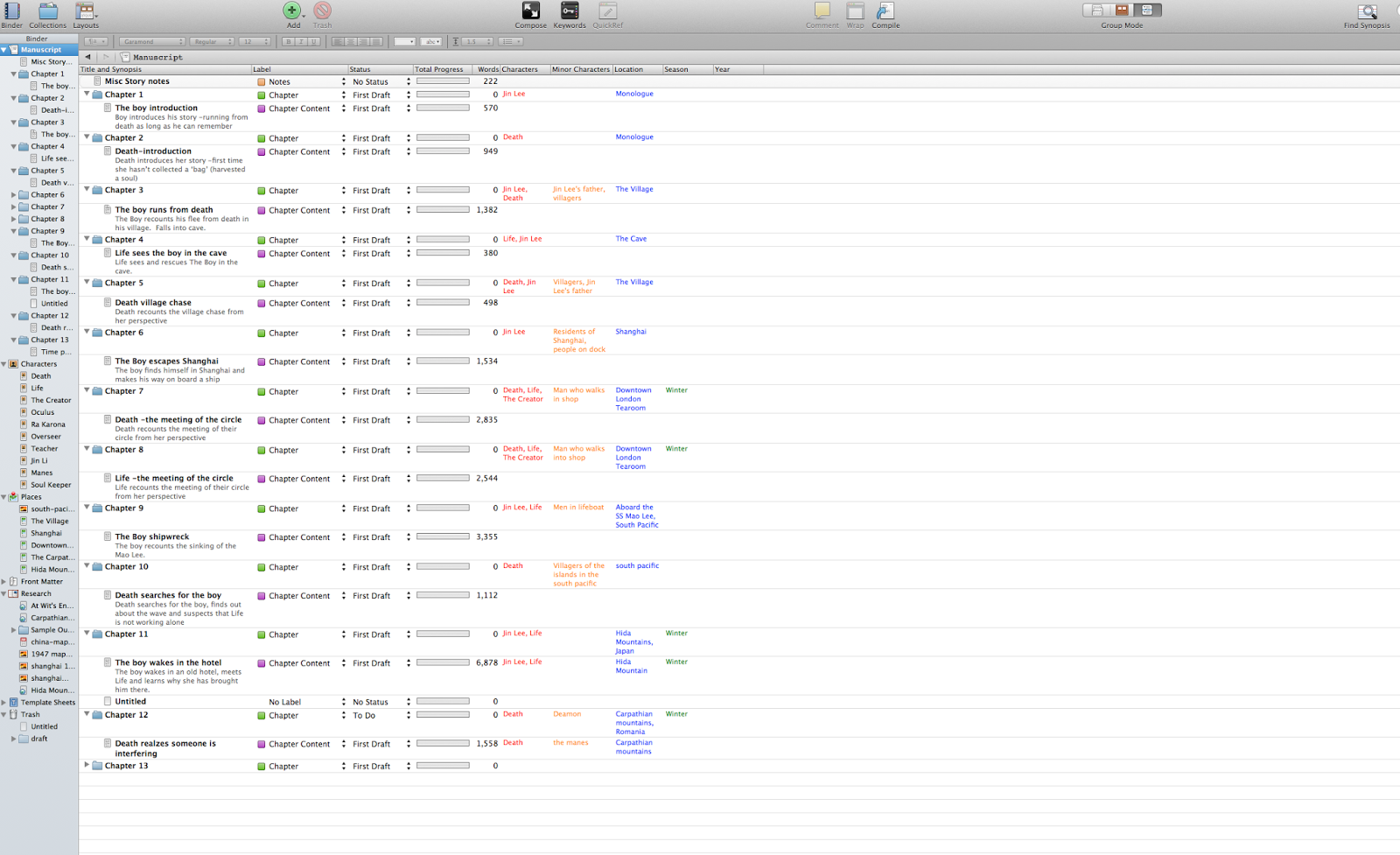 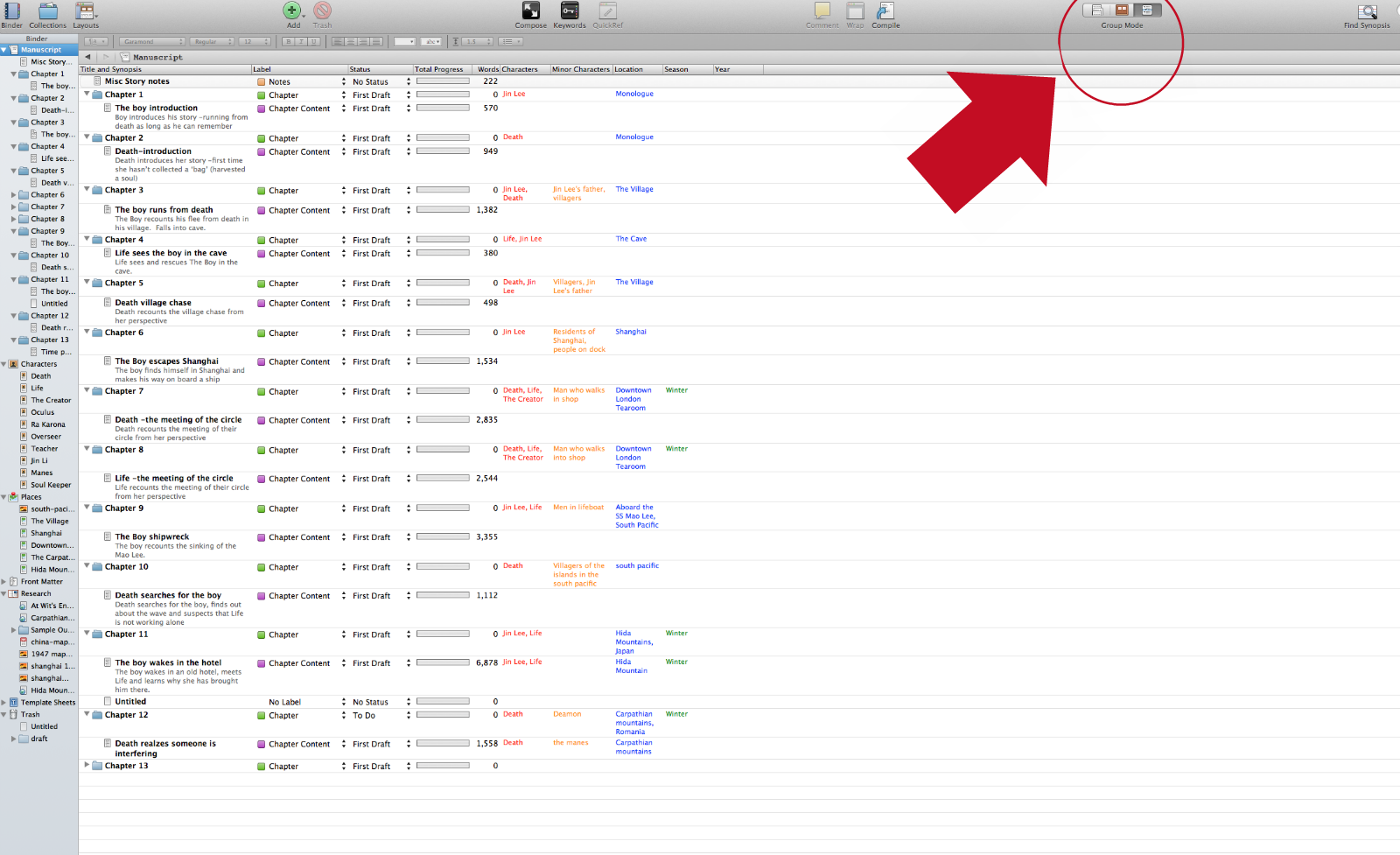 What good is outliner view?

Think of it like the corkboard view on steroids.  Not only does it show each chapter synopsis, you can create labels, update status', look at your word counts per chapter as well as add custom columns.

Here is how to add custom columns: 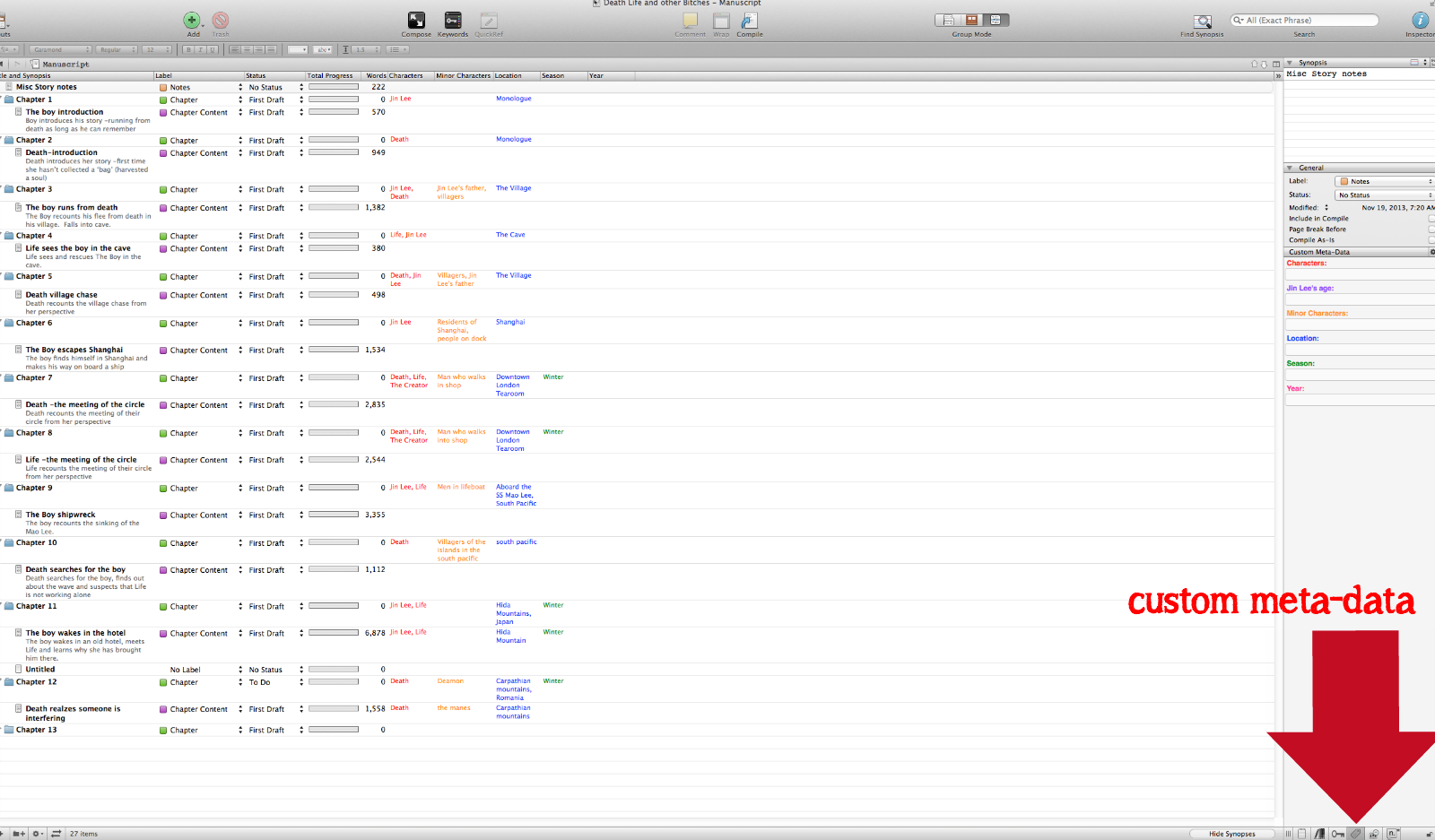 The Meta-Data Settings menu will pop up. 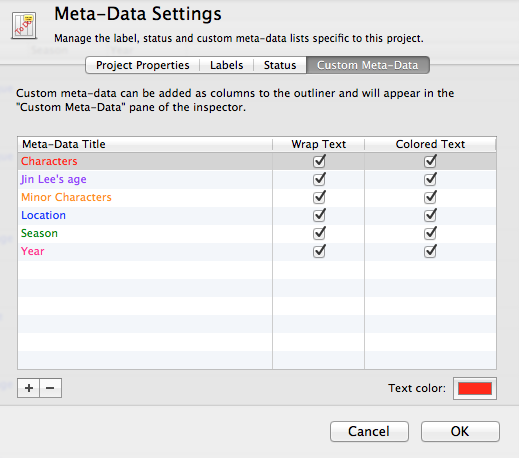 Here you can add custom columns in the outliner by clicking the +, giving it a new title and selecting if you want to wrap the text or color the text.

When you are finished adding columns, click OK and viola, they will show up in the inspector. 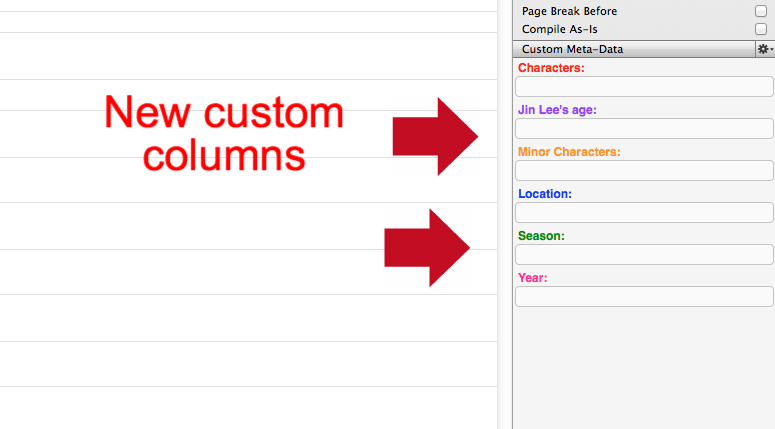 You will need to fill in the information for it to show up in the outliner. 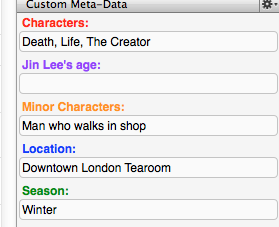 That's it.  You now have custom columns and can, at a glance, view important information about every chapter you've written.  Good stuff!

Do you have any custom columns you use consistently?  If so, please share!

If you've been following my blog, you know I have a thing for Zombies...the apocalypse...the end of times, so the only surprise should be that I've waited this long to create my top five list. Believe it or not, the characters are intriguing in Zombieland.  Each has his or her own set or neuroses that help get them through the post-apocalyptic world in which they're trying to survive. The humorous take on what is often a serious and scary genre makes this movie one worth watching.


I may be dating myself...but when the original Resident Evil game came out, it scared the crap out of me.  I love the premise of everything taking place inside a mansion -it keeps the action (and terror) close and intimate.  I remember the sound being awesome for this game.  You could hear everything -footsteps, spent bullet casings hitting the ground, the tearing of flesh.  I haven't played any of the more recent versions of RE but I have watched the movies, which just don't have the same impact as the game.  The only downside now would be, I'm sure, the graphics are most likely way behind the times. 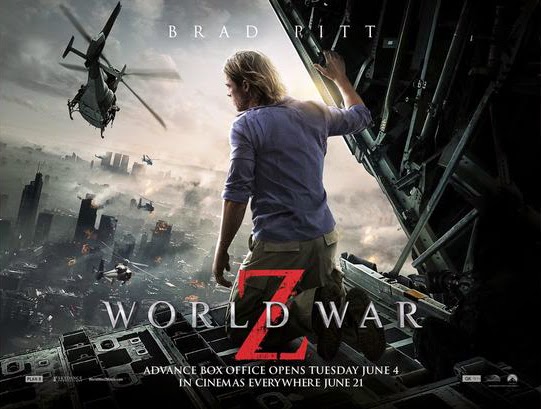 World War Z was first a successful book by Max Brooks. The story goes, Brad Pitt fell in love with the story and single-handedly got the film produced.  I wasn't thrilled with the book to be honest.  The premise was great but I had a hard time identifying with the characters.  Some were interesting but others were rather bland.  What the writers, Matthew Michael Carnahan, Drew Goddard, Damon Lindelof (hey! he was a Lost writer) and J. Michael Straczynski did was narrow the focus to one man (Played by Pitt) giving the viewers a character they could identify with and follow throughout the story rather than jumping from perspective to perspective like the book.

Yes, I'm saying it.  I LIKED A MOVIE BETTER THAN THE BOOK! 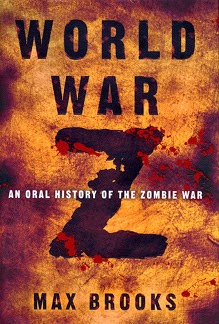 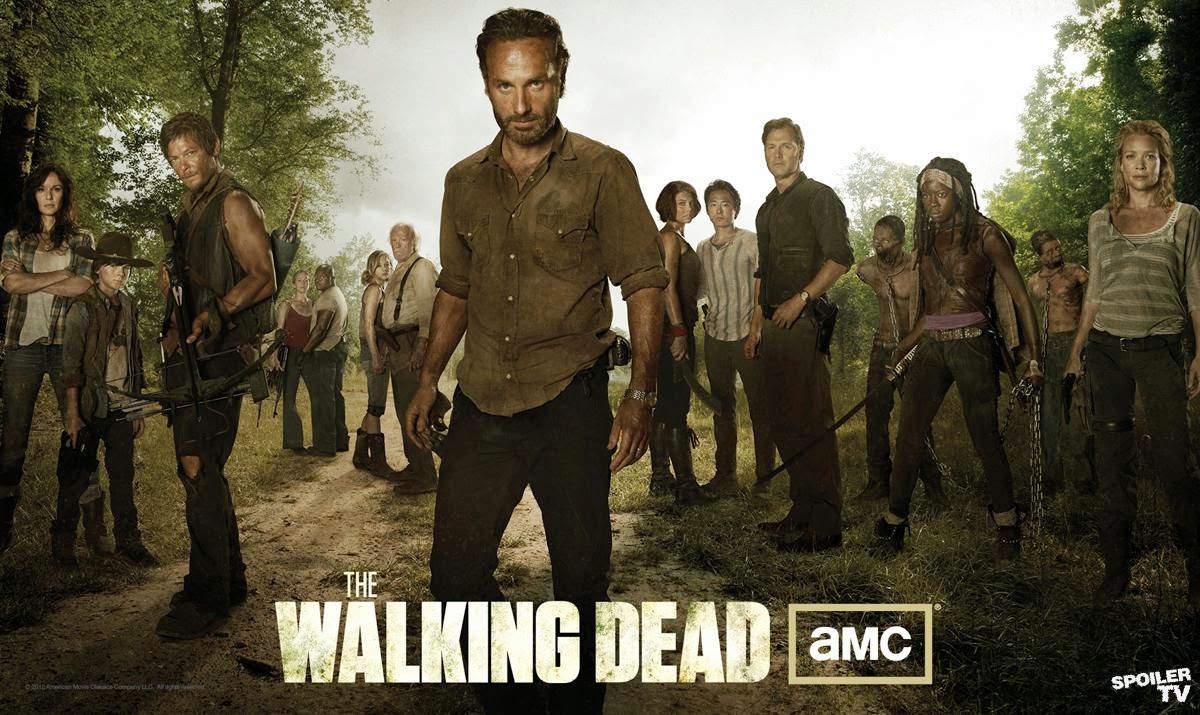 There is a reason why The Walking Dead is TV's top-rated show among adults 18-49 and averages 10.2 million viewers per episode.  IT ISN"T THE ZOMBIES!  It's the compelling characters.  Every great character has a great story.  The Walking Dead's large cast of characters is no exception.  Many people pass judgement far too quickly on a show thought to be nothing but gore and violence when, in reality, it is a character driven masterpiece.  I personally can't get enough of The Walking Dead and cannot wait until it starts up again.

For more stats on The Walking Dead ratings, check out THIS ARTICLE from The Hollywood Reporter. 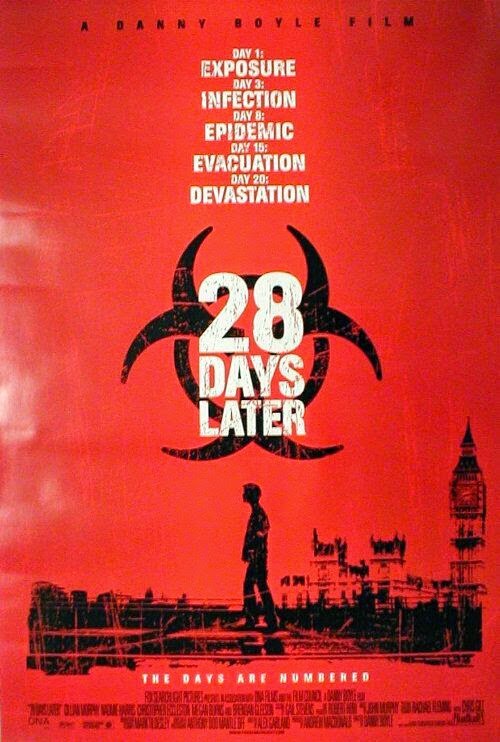 Forget characterization.  This is the straight-up scariest zombie flick of all time.  It takes place in London after the zombie apocalypse.  Main character wakes up in a hospital (very similar to Rick from The Walking Dead) and everything has gone to hell.  The Zombies are scary -the run...no, they sprint and to top it all off, there is an element of human evil as well.  Turn off the lights for this one and keep an extra pair of underwear handy...it's that scary. 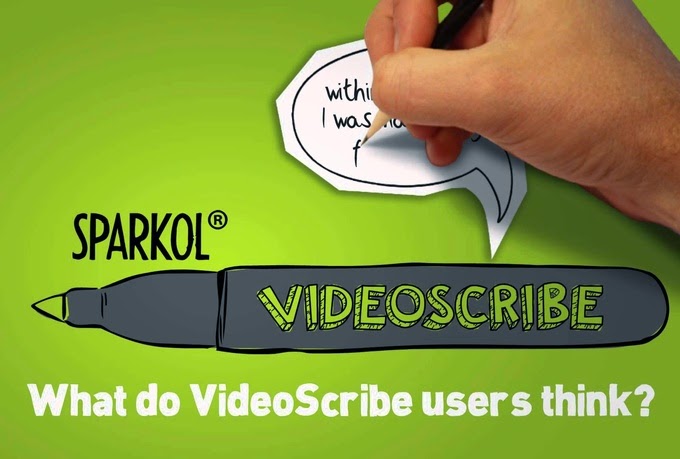 So I was listening to the Social Media Marketing podcast because...well, I'm kind of obsessed with social media marketing, and I heard about this cool way to create a professional intro to your videos.  My video is below...check it out.


You can create your own video for free on Sparkol.

If you're posting video to YouTube frequently, it is worth checking out!

Here is another video (they obviously spent more time than I did) with a cool intro.

Hope this helps someone out there.
Posted by J. R Wagner at 11:35 AM No comments:

Formatting a document, documents or entire manuscript in Scrivener 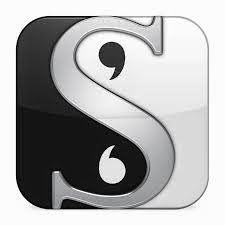 You've got a document in Scrivener you want to format.  Maybe some of the folders in the binder have different formatting types and you want consistent formatting throughout the entire manuscript.  Follow These steps:


1.
First you need to set the formatting how you want it.  Go to:
Scrivener > Preferences > Formatting 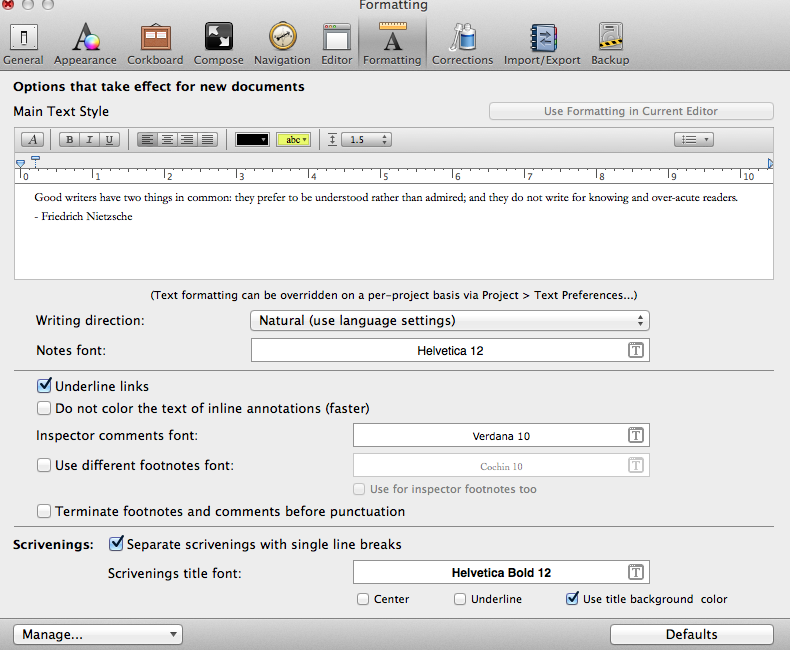 Instead, click in the white area where the Nietzsche quote is then change the formatting using the buttons (bold, alignment, spacing etc.).  When this is how you'd like it, close this window.

you will get this pop up 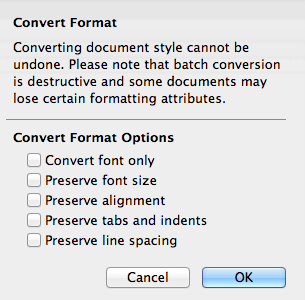 3.
To convert the document with the formatting you set in the formatting preferences
Scrivener > Preferences > Formatting menu,  (the settings you just customized -step 1,) don’t check anything.  Click okay.

Now whatever you have open in the editor will match the formatting you set in formatting preferences (step 1).

This process took me some digging to figure out. Hopefully someone finds this helpful. Let me know if you do.
Posted by J. R Wagner at 11:41 AM 1 comment: