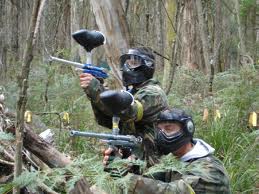 I know.  Kind of a random topic...but I love random topics and paintball is loads of fun!

I've been paintballing numerous times and once the game begins, I quickly realize I've got no clue what I'm doing (nor do the folks I'm teamed up with).  Being the super-competitive person that I am, I decided to see if I could find a strategy that would ensure victory (or at least increase my odds of not getting creamed)


I found several good, easily implementable strategies at this website:

Here are several I thought could be effective.

Team based flanking is an incredible Paintball Strategey if properly implimented. If your team is pinned down, split up and advance on both sides of the opressers. If they don't get eliminated, they will soon fall back when they lose the front protection of their position. The more angles that a target is surrounded by the more stressful and difficult it is to hold a position.

If you are playing a small center flag based game, I had a Paintball Strategy that we would implement occasionally when the timing was right. Before the game started we elected the fastest running players, (usually 2-3) We had them set their guns down and told them that their only goal is to get the flag. They are to run and get the flag as soon as the horn blows, no distractions period! With that laid out in stone, The other 2 runners would follow the first runner a small distance behind and grab the flag if the first runner fell. Same with the 3rd runner. With a flag train setup the rest of the players focused on running with them and shooting, taking cover as far up as possible, but mainly I had them advance running while shooting to keep the opposing team in cover. We won 80% every time we tried this. When we lost it was because the other team was expecting us to do it. Try to mix up your Paintball Strategies often!

You have most likely seen this if not done it before already. Well practiced teams should be able to do this without thinking. Leap-Frogging is watching your team mates advance while you cover them. You don't have to be under fire for this, it should be common movement for a small team group. Figure out a gesture for "move" and "stop". As your team moves up one by one the chance of your whole squad being taken out is slim, If you have experienced players you can really work this paintball strategy. This will help to eliminate a camping player from eliminating your team. If the current point man get's shot at, the rest of your team can then implement various Paintball Strategies to eliminate the threat.


Here is a great diagram of where one should be when approaching an enemy positioned on higher ground. I found this photo and an insanely detailed, multi-part blog post on paintball tactics HERE.  Well worth checking out. 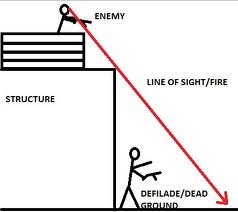 Many of the suggestions from GreyOps.net were more advanced than the game play I'm used to but they are very helpful!

Rather than bog you down with more and more tactics and strategy that would overwhelm a beginner, I will leave you with this final thought:


To purchase Exiled, bid on the movie rights, hire me as a writer for the next Blade Runner film, the next Star Wars film...for videos, fan art, contests and more, visit my website!